11
Today was opening day of the CWS and with it being the last year at Rosenblatt it was more of a zoo then normal. This year was dry with 1st Round Draft Picks but TCU's top pitcher Matt Purke and last years 1st round pick, who turned down a huge signing bonus (obviously 4.5 mil wasn't enough for him) last year was here. The guy is only a freshman and already is rocking the big league attitude. He seen us coming up and tried ducking and hiding until an 8 year old girl stopped him. His graph is crap and I can't wait to see it in a couple years when he gets drafted.

The fanfest has signings every year with ex big leaguers and hall of famers. In the past they would sign anything but this year they would only sign the supplied AT&T photo.

With this being the last year at Rosenblatt the CWS had a 30 year anniversary team and the likes of Nomar, Todd Walker, Robin Ventura and Will Clark were there. Nomar signed for one person and personalized it. Got Will Clark later on in the night.

One last thing some guy named Barry Bonds was also honored on the 30 Year Anniversary Team. There were 5 of us there and he signed for all 5 of us and sweet spotted balls and bats. Barry lost a few pounds but seemed to be alright and was totally cool. Made the night totally worth it. 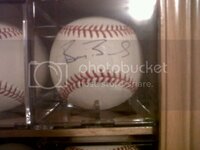 128
5.00 star(s)
Wow Bonds hit a sweetspot? He never would sweet spot when he was active. Excellent catch!

This is good to know about Rice too, he's doing a signing at a minor league park later this summer, and I'm not going to make the drive if he's not going to put his HOF inscription on things.

625
5.00 star(s)
Congratulations on a great haul.
I love college baseball. Those kids have a lot of talent and give it everything they have.
I envy you living in Omaha right now.

Trader Rich said:
Congratulations on a great haul.
I love college baseball. Those kids have a lot of talent and give it everything they have.
I envy you living in Omaha right now.

It is a great time. Each year it gets more and more corporate but the kids are always thrilled to be here

127
5.00 star(s)
that is quite an amazing haul!!.....and i can vouch for Purke as well. the kid's stuff is electric but he does come off as an uber-******. i was the only one to get him after one of the TCU home games this year(he signed 3 cards) and i got the sense that he thought i was immediately putting them on e-bay. plus he wears his hat like a clown....

11
Here are some pics as promised. 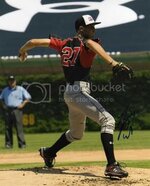 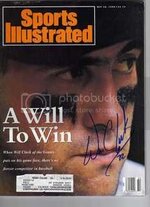