127
5.00 star(s)
Had some choice seats for tonight's debacle in Arlington. The Ranger bats were as silent as the crowd at times. But we still had a blast as my 11 yr old nephew got to "steal" third base before the top of the 7th inning. He had 35 seconds to run from left field wall, grab third and run back. And he is slower than Xmas but managed to make it. They gave him the 3rd base from last night's game(the one Lee pitched lights out and Nelson Cruz bombed in the 10th to win) so hopefully some day, we can get Nellie to sign and date it...

Anyway, it was autograph Wednesday where they have 4 lines in various parts of the park. My nephews were so unimpressed with the selection(Teagarden,Hawkins,Treanor,Chris Davis) we instead watched A's BP.

Got 2 baseballs during BP...
The haul was small but not bad, plus that third base is pretty cool!! 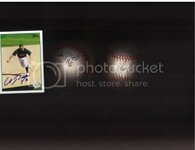 thanks for reading!!
Chris

rangersfan1982 said:
Shoulda got Teabag, he is a tough one to get.
Click to expand...

I thought Andy Hawkins was too.

Not a bad job by getting Braden anyways.

rangersfan1982 said:
Shoulda got Teabag, he is a tough one to get.
Click to expand...

but he sucks....it was their choice and the line was long...

Hawkins can be tough too; but they would rather watch BP and try to get baseballs...it's funny the importance and value 10-11 yr olds put on MLB baseballs...


K.C._Royals! said:
Third Bass the "rap" group = not awesome
Third Base from a Rangers game = extremely awesome
Click to expand...

I gave Rajai Davis "the gas face" when he ignored us during BP...