348
4.90 star(s)
Carlos Guillen was rehabbing and I was one of the lucky one's to get him when the news cameras were on him, got shut down next 2 times including after he left early before the game was over, said he got me already, yet when the news cameras were on and I had 2 cards in hand he said maybe I'll get you later when there aren't as many people. Well there was maybe 15 people outside when he was leaving and needless to say was a jerk about it. I really didn't care since I got my 08 Topps done but I did care about him being a jerk when I heard how he ordered the team their meal before anyone arrived so they could eat when they got there and how he pretty much had the locker room cleared out for himself and ordered nobody talk to him. Guess he sat in the clubhouse alone for 30 minutes watching TV. Guess he hasn't realized he hasn't been good for oh about 3 years now. Inge now he was a class act on Tuesday, signed til everyone that waited after the game for his autograph left the stadium. Didn't leave until 1 AM, Guillen on the other hand, gone by 8:40 PM. 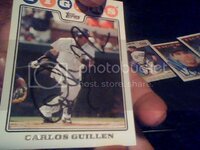 Mike Henneman was signing autographs for the Tigers Friday promotion, went thru the line 4 times, could've gotten thru 5 atleast but decided I had enough and wanted to smoke and get another beer. Gave 1 of them to a buddy, these are all for trade. 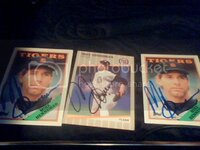 348
4.90 star(s)
no hurry as long as they get here, yeah I'm happy I got the one I really needed, just can't believe the crap he pulled as far as with the team itself

551
5.00 star(s)
BANNED
Nice man, mailed your Brogna card yesterday. You should have it Monday.