Your Favorite Cards of All Time?

PRosefan1 said:
My favorite card of all time is 1953 bowman color *** Wee Reese. Iconic!! Wish I still had mine.
Click to expand...

These are going for some decent money at the moment! Cool card with a great action shot! Reese was a great player,I have owned several of his autographs and he had a really nice signature too! 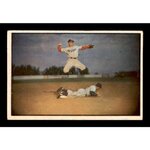 Who is the sliding player??

KCLJ520 said:
I have another memory to share today. My beloved Grandparents took me to my first ever baseball game on August 23rd, 1988: Cubs vs. Astros at Wrigley Field. Jamie Moyer pitched a 9 strikeout complete game, and we sat in the section right below the announcers' booth, so we saw Harry Caray multiple times, waving to him after the game as he left the booth too. I still remember "Cubs Win! Cubs Win!" like it was yesterday, and the experience of being able to go with my Grandparents was so special to me. They went frequently since Gramps was a news editor for the Chicago Tribune, and often ended up with free tickets at the Tribune Corporation, WGN, and the Cubs were all in business at that time.

Years later, Jamie Moyer was so kind as to sign his stadium giveaway rookie card for me (from a set my Grandparents got at the game and gave me in 1986), and also signed my game ticket stub, which I made into a custom. These are in the "Cubs Corner" of my display!
View attachment 77787View attachment 77788

They are why I make it a point to take my kids (whoever wants to go!) to the ballpark every summer, God willing they go through life with the same special memories.

Nice story Kevin and this is one of the reasons I am unhappy that they don't provide actual ticket stubs. I used to love getting an autograph from that day on the stub.

DaSoxFan said:
Nice story Kevin and this is one of the reasons I am unhappy that they don't provide actual ticket stubs. I used to love getting an autograph from that day on the stub.

You know Henry, it has changed so much over the years, it is so hard even to track players down anymore to GET autographs on anything anymore! My 8 year old son just told me he would like to get a player to sign his baseball at the game we are going to in June, and I said it is just super hard to get players to sign before or after games anymore. Busch Stadium used to be a really good place (or at least I have had success there in the past) but now its really difficult to get in close enough proximity to the players, much less get anyone to come over before the game to sign. Is Sox Park the same? (I still think of it as Comiskey!!)

Impressive! I struggled to identify him, much appreciated!

214
5.00 star(s)
Here's another story from back in the day: I loved Kevin Butler from the 85 Bears, as we share a first name! This was my favorite card of his as a child, and he signed this for me years later: 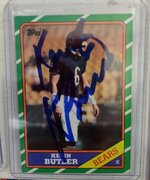 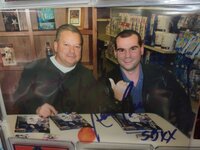 He is a super nice man in real life as well, and signs everything put in front of him!! 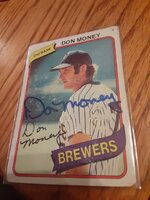 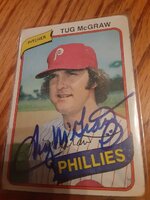 Two of my favorite autos from my first year of collecting. The Don Money was the first card I remember from my first pack. I had him sign it in 2010 or 11. He made the comment that it looked about as rough as he did!

. The Tug was from Fan Fest in Milwaukee in 02 right before his tumor was found. Mentioned that I had met his daughter in law (Faith Hill) and now him, just need to meet his son now. Think he's had a pretty decent career too.

Tugger laughed at that.

. The Tug was from Fan Fest in Milwaukee in 02 right before his tumor was found. Mentioned that I had met his daughter in law (Faith Hill) and now him, just need to meet his son now. Think he's had a pretty decent career too.

Those are awesome cards, and even more awesome stories! This is what makes this hobby fun, the memories attached to these particular cards that will always stand out in our minds!!
You must log in or register to reply here.

WTT Thousands of Baseball 1980s-2020s Inserts/Parallels/RCs/Stars Cards in your FAVOR!!!
2