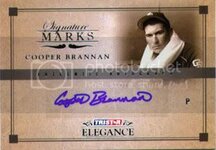 Wanted to add a Brannan auto for awhile. If you don't know his story, he served in Iraq and was wounded when a flash bang grenade went off in his hand and blew off three fingers (two were saved, but lost the pinky on his glove hand). He returned to the states and had a bunch of operations and ended playing baseball for the military baseball team. The Padres signed him and he played minor league baseball in 07 and 08. Couldn't find anything about 2009, so not sure if he is still playing.

57
4.90 star(s)
Very cool story and nice pickup. Isn't Brannon also a guy who switch-pitches? As in he pitches both left and right. I remember hearing that from several members over on another message board a few years back. I've heard he's a nice guy as well. Good pickup!!

Great story and a nice pick up too.

7
Awesome pickup!
You must log in or register to reply here.