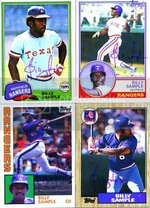 Sample played in the Virginia state football championship game against T.C. Williams, the team from Remember the Titans. I mentioned that in my letter and he sent a note back along with a photo copy of the rosters from that game along with a press release from the 30th anniversary of the game. Here's what the note says:
"Tim,
Bertier, the paralyzed linebacker played in the game, his car accident obviously later. My late uncle Ike, lived in Severn. Best of health --B"

If you look under my avatar, I live in Severn. He even added an extra 44-cent stamp to my SASE to make sure it arrived with the extra stuff he added.

551
5.00 star(s)
BANNED
Great return man, he is an excellent signer. Almost always includes a letter with his stuff. Great guy.

185
5.00 star(s)
yeah his letters are always personal and so cool, i love how he connects with fans

150
5.00 star(s)
bitching dude hahaha
You must log in or register to reply here.