2 in plus hockey IP 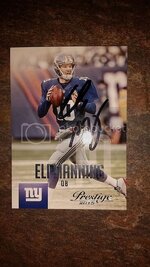 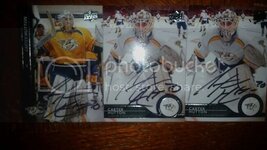 Saturday went to Griffins vs Monsters game and graphed pregame. Brand new sharpies were worthless, both new silver and red paint pen werent working well either. Thankfully I had a gold sharpie that actually worked properly in my bag. So have 2 pucks I will be wiping. Visitors took the bus over. The few of us only got Manny Malhotra to walk over and sign which worked out since needed him for my Score set. Then we saw 3 players walk to arena, so randomly grabbed a guy for my puck since didnt look like would be getting Sonny Milano. Jaime Sifers signed Blue Jackets puck. They informed us Josh Anderson was behind them. (Wish hadnt got that puck signed now) So got him on my logo 8x10. Well the bus came back for round 2, guess who the one guy that we called for that came over, yup Sonny Milano, whole reason I bought a Blue Jackets puck, got him on 8x10. Griffins wise got Xavier Ouellet on 2 pucks and Andy Miele on 1. Then Andreas Anthansiou on 5x7 first goal pic 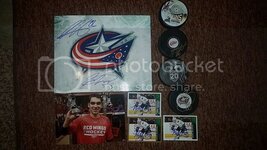 Double of Hutton, Ouellet Wings puck and 1 Score gold and base of Malhotra available, Jaime Sifers Blue Jackets is available also until they come to town again or I can get someone who has already played for Columbus on it.
Last edited: Dec 7, 2015

About to dive in to a sea of baseball
2 3