278
5.00 star(s)
There will be one autograph or memorabilia card in every 36-pack hobby box of this long-running staple with two autographs and a Relic in every 10-pack HTA Jumbo box when it arrives in late August.

The set will include 110 rookies in their NFL uniforms from the Rookie Premiere along with NFL Draft 75th Anniversary, 1952 Bowman and Red Zone On-Card Autograph Rookie cards. The base set will consist of440 cards total with the rookies found one per pack. Look for the standard parallel configuration — Gold, Black and Platinum — as well as

Planned for the dual Premiere autos is a Tim Tebow-Colt McCoy autograph card as well as a Sam Bradford-Jimmy Clausen dual. The lone quad on the preliminary checklist shows Bradford, Clausen, C.J. Spiller and Dez Bryant together.

IM EXCITED ABOUT THIS ONE!!!!!

New this year is the Gridiron Giveaway, which gives collectors the chance to win vintage cards as well as signed memorabilia similar to the Million Card Giveaway in football. These code cards will be found one in every six packs.

Also new will be Sketch Cards as well as 1952 Bowman retrospective cards. 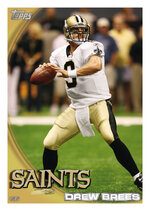 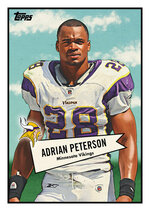 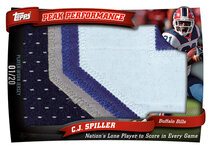 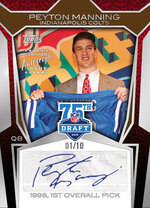 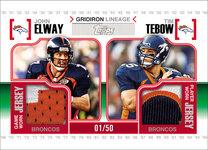 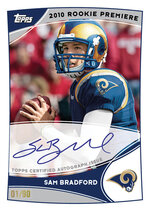 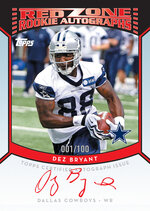 Pictures of Autos and Relics for Sale

Everything Now 15% Off Listed Price! HUGE List Of Football Cards For Sale!