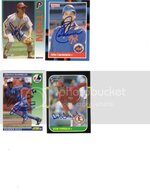 thanks for reading!
Chris

Ahhhhhhh, Dickie Thon! very nice pick ups, Chris! I always wondered what might have been if he hadn't had that near career ending beaning in 1984. Like Paul Blair before him, he was a shell of the player he was before the beaning. He came back, but the injury severely damaged his vision and depth perception. There were spots where he would be trying to follow the ball to the plate and the ball would just disappear. I remember listening to that game on the radio. I can still remember the sickening thud the ball made when it hit him. I often wondered if it was like that with Tony Conigliaro, as well.

R
Why were my posts deleted in 2 of the 3 baseball forums?