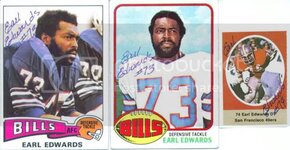 90
5.00 star(s)
I mentioned that Mr. Edwards wrote me a note thanking me and did not mention that is also said, "Here are a few extra's for your effort." Well, I only got back the three cards I sent, so I figured he meant to throw in an extra card but forgot to, no big deal.

Well today a manilla envelop arrives from Mr. Edwards. Inside were 7 signed photos plus three photos of his sons. His one son Damien plays football for South Florida and another son Gavin plays basketball for UConn. The photos of Gavin are from a program it looks like, 8.5x11 posters with a scorecard on the back.
He included 8x10 or 8.5x11 signed photos of himself on the following teams:
Edmonton Eskimos
Cleveland Browns
San Francisco 49ers
Buffalo Bills (4 different)
I was blown away and will be sending a thank you note out to him.

2021 Topps Update cards . Insert sets now complete other than TEK cards. Can use 6 cards for another base set and 42 for another
2 3 4