10
5.00 star(s)
BANNED
Got two ebay successes and received a trade in from thebench today! (Thanks ckinney!)

First, my 51st Tiger pitcher auto, in from ebay today: 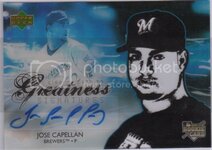 Only played briefly for them, but it counts!

Next I got this interesting card from ebay. I posted a thread about this earlier asking if it was authentic. Well it most certainly is not which makes the auction a little deceiving. I gave them bad ratings on clarity as they claimed it was "autographed by both parties" when it's not a real signature. Oh well, it was pretty cheap and I'm debating if i Should just send it to Branca via TTM and see if he'll sign it. Thoughts? It's kind of a tacky thing to send him as he probably doesn't wanna remember it, but lmk 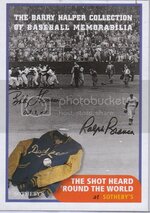 And then I got these three in from ckinney, all ft! let me know if you're interested:

10
5.00 star(s)
BANNED
thanks man! i'm hoping i can turn the last three into tiger autos through trade!

Team for Team Insert/parallel trading (You send me Dodgers, I send you your team)