Anyone know anything about 1994 King B Discs?

anyways, Have had a few 94 King B discs of maddux since I started collecting him, always been the round disc. The one from this lot is square with a white border all around the disc.

I guess my question is, were these released this way and people cut them out themselves? Its not perforated or anything. Or did this one just not get die cut at the factory? If so has anyone else ever seen one like this? have any idea as to rarity or is this a common thing from 94. 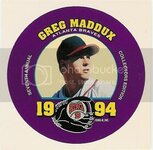 2,852
5.00 star(s)
Nick - Just an uncut version. Most likely cut from a full sheet. They are known as squares. I have numerous Dawson's from different sets.

Loyalty32 said:
Nick - Just an uncut version. Most likely cut from a full sheet. They are known as squares. I have numerous Dawson's from different sets.

yup!
You must log in or register to reply here.

can you find something you need? let me know thx.