Bought 5 Packs Bowman got a MOJO!!! 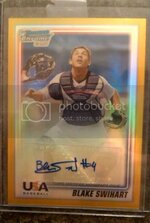 Blake Swihart - C - Rio Rancho, N.M. (Cleveland HS)
• 2010 Louisville Slugger All-American
• Participated in the AFLAC All-American High School Baseball Classic
• Played for the USA Baseball 18U National Team in 2010
• Paced USA Baseball 18U National Team with a .448 batting average, six doubles, one triple, five home runs and 17 RBI in 17 games in 2010
• 2010 Cincinnati Reds Area Code Team
• Named All-Metro by the Albuquerque Journal hitting .517 with 14 stolen bases for Rio Rancho High School in 2009
• Selected as a finalist for the Jackie Robinson Award, a national award given to the nation's top rising high school senior
• Averaged 13.5 points, 4.8 rebounds and 3.5 assists per game as a member of Cleveland's basketball squad in 2009-10
• 12th-ranked player in the nation and top-ranked player in New Mexico for his high school class by Perfect Game USA

809
5.00 star(s)
Very nice, congrats on the pull. One of the best hs hitters in next year's draft and in the 18u set. I haven't seen many gold ref autos of him since release. If you're looking to move it, plmk.

I have a friend of mine who sells cards put it on ebay to see what I can get for it. I am listening to offers now for it.
You must log in or register to reply here.

Got a gold star set from Walmart