265
5.00 star(s)
BANNED
I usually don't show off my pickups or anything, but I've never really tried to complete a high-end set before.
Last winter, when Sweet Spot came out, I busted 2 boxes. I loved the look of the base set. It was just so colorful, and popped out. It was issued in the winter, so it was one of the first sets of the year to put players traded at the deadline in their new uniforms. I started to piece together the base set. I had 2 Sweet Beginnings Rookie autos from these boxes, and the numbering went with the base. I found out there are 50 short printed Rookie Autos.
I gave it some thought. I loved these for a few reasons. Again, the cards are great looking. Also, they're individually numbered between 199 - 699. Most importantly to me, though, was the fact that they are on-card autos.
I jumped on the 'bay, and grabbed a couple of lots of them, and busted a couple more boxes. I was on my way. I put up a post here with my needs, and was able to add to what I had.
With 5 to go, I found out that Upper Deck did not release cards or redemptions of #132, Jonathan Albaladejo. While this depressed me, I looked at the bright side and figured I only had 4 to find. I bought three more, and the last one I needed turned out to be in the form of a redemption - the 4th in the 49 total autographs.
I finally pop the code in for #120, Emmanuel Burriss. I waited for weeks to have the card that completed the set. Finally, my redemption history on UD.com was updated with "Card was not produced - contact Upper Deck for a replacement." Kind of a bittersweet way to find out my set was completed!

The scan below represent 9 of my favorite base cards. By the way, I have plenty of base to trade. 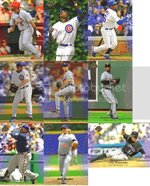 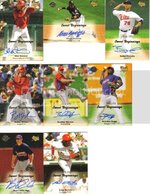 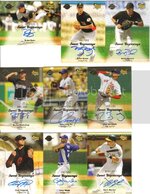 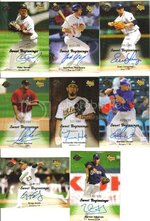 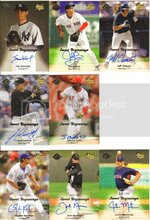 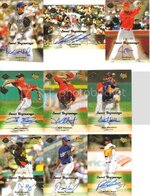 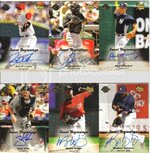 It was challenging. Mostly, it was fun. Thanks to those of you on this site who helped me finish it!
Let me know what you guys think.
-Casey

645
5.00 star(s)
Awesome!! Enjoyed reading your story- I bet it was fun to put together. Now you will have to put the GU set together
Congrats!
Mike

Great looking set, love that they are on-card autos

mlbme22 said:
Awesome!! Enjoyed reading your story- I bet it was fun to put together. Now you will have to put the GU set together
Congrats!
Mike
Click to expand...

Unfortunately, the GU was tradebait for some of the autos.

Yeah. I just hate scanning. I guess I was proud enough of the set to get a good 30 minutes of scan time in.


Meliah said:
The Alexei Ramirez cost you more than the Longoria?

Great looking set, love that they are on-card autos
Click to expand...

I was floored when I saw what Ramirez was going for. I paid about $20 more for Alexei. I couldn't believe it.

On card autos was the hook. Almost everything is serially numbered now, so as nice as that is, it's not as rare as an entire on card auto set. Thank you!

63
5.00 star(s)
wow that is great! Glad to see people still having a blast collecting cards!

bongo870 said:
wow that is great! Glad to see people still having a blast collecting cards!
Click to expand...

Yeah. It was a ton of fun. Made me think about becoming a set builder.
-Casey

3,492
5.00 star(s)
Didn't think too much of the set when it came out, but boy does it look nice altogether like that. With Longoria, Kershaw, and Ramirez, that is not an easy feat. Very impressed!

dp33 said:
Didn't think too much of the set when it came out, but boy does it look nice altogether like that. With Longoria, Kershaw, and Ramirez, that is not an easy feat. Very impressed!
Click to expand...

Thanks!
The funny thing is, when I saw the first one, I hated it. I had never purchased Sweet Spot before, and I thought every autograph was on a baseball or leather or a bat. I looked at the rookie (of whom I had never heard), and asked the shop owner what the heck was going on.
The more I looked at them, though, the more there was to like! Hopefully, a couple of more guys in the set can put together decent careers.
-Casey

2,356
5.00 star(s)
Casey, nice set, great determination. Hope we can get our trade moving along. Tom [email protected]
Whats your next project ?
You must log in or register to reply here.