348
4.90 star(s)
Camped out, was literally first in line for the Kill Hannah/Smashing Pumpkins show. Favorite 2 bands seriously. Got in for the SP soundcheck, long story short got Kill Hannah's setlist, guitar pick from Maddox, then got robbed of Billy Corgan pick he literally threw right to me and was in my grasp and another guy knocked down Greg from KH's pick he definately threw to me. I most likely will have my picture on Mat Devine's next blog. They were all quite happy to see the first person in line wearing a old Kill Hannah shirt. Best show I've ever been to and I've been to a lot.

Best part is Mat grabbed me before I even saw him after the show was over wanting a picture of me and my shirt. First thing he did was write 1st in Line! after he literally grabbed it from me. I think they were more excited I was the first person then I really was lol. 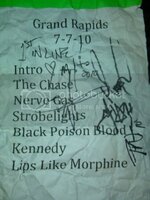 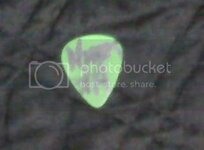 348
4.90 star(s)
private concert? lol, I gotta signed setlist, signed poster, signed drumhead, signed cd, everyone in the bands guitar picks now since Maddox pulled one outta his pocket for me and signed it. Only thing I don't have is drumstick but guy they have touring now is temporary and don't have the early original cd's but they have been out of those for years now. Thanks though.
You must log in or register to reply here.