348
4.90 star(s)
Ok so it's not quit the same type of HOFer as you would think. In 2009 the West Michigan Whitecaps started a HOF and Brandon Inge who happened to be on rehab assignment tonight and possibly tommorrow was inducted in '09. Was the only one he did tonight, asked him to put Whitecaps or Caps HOF 09 but it threw him off a bit because after he signed he was talking to himself saying ok how am I gonna add this. Either way I don't care, would like to get every guy that gets in this very prestige hall with inscription eventually lol. My buddy got a foul ball Inge hit, yeah I hate him. 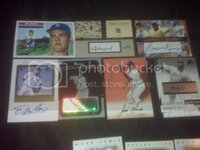 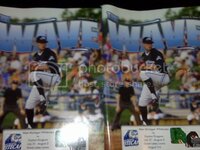 Then got what I'm hoping is the last of my Luis Quinones 50/50's complete, Chuck Crim, Avasail Garcia, Brian Ruggiano, Joe DePastino and Brian Cavazos-Galvez. 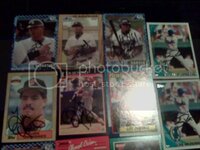 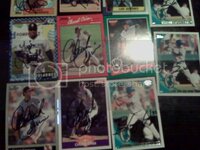 All the Chuck Crim's are available, I'll be keeping one but don't matter to me which and 2 of the Ruggiano's are FT for either Tigers, 08 Topps or other 2010 Topps Pro Debut's signed. 1 of the Richard Zumaya programs is available also
Last edited: Aug 4, 2010

CW13 said:
no worries. just seeing if you wanted another tiger card of his...i see him very often.
Click to expand...

anyone else? just don't really have a need for doubles

381
4.90 star(s)
I only got Ruggiano, Galvez, and the recently traded Wallach on my first trip to Dow Diamond. I still promised a few guys here that I'd get Crim, so I'm going for him, Smith, Songco, and Wall now.

Not a bad deal though, I heard Inge did pretty well and was likely heading back to Detroit today.

348
4.90 star(s)
Yeah it sounded up in the air if he would be back for a second night or not, someone stole his batting helmet out of the clubhouse too, guess the same people that did it also stole Bonderman's cleats. He did alright, had 2 doubles.

Rangersfan, sure which Crim do you want?

305
5.00 star(s)
Congrats! I wasnt able to go. I really wanted to, because I need a card of Inge still. Im hoping hes back tonight, but I dont think its gonna happen.

EDIT: As expected Inge is back in Detroit tonight
Last edited: Aug 4, 2010

348
4.90 star(s)
Yeah it pretty much was he was most likely going back last night, asked him and he all but said yes, said he was feeling fine with no pain but he didn't know if he would be heading to Detroit for sure.
You must log in or register to reply here.

Hundreds of TTM and IP autos. Many HOF and deceased