341
5.00 star(s)
I think that most team and player collectors would think that Printing Plates in general are a pretty sinister idea... I mean, 4 extra 1 of 1's per set, on top of the huge number of rare items that are already being produced?!

I'm not talking about that though.. I'm talking about the plates that just look kinda creepy. I just got the Scott Lewis in today. I was happy to get the Indian's pitcher (and former OSU Buckeye) RC plate for under $5 on ebay... but his eyes look demonic, haha. 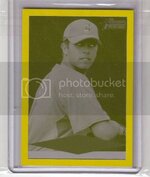 I've had this Albaladejo for quite some time.. I haven't gotten any trade offers on it, but I've had quite a few people that have said that it looks creepy.

12,761
5.00 star(s)
In the old days...pictures with the red eyes! Now we have printing plates with that vampire eyes! Best regards, David
H

335
5.00 star(s)
Looks like something you would see on one of those ghost shows.
You must log in or register to reply here.

B
Woe to any youngsters joining our hobby

S
Making a want/ trade list and linking to it...