127
5.00 star(s)
About two week turnaround from the newest member of the Baseball Hall of Fame

1 GU OMLB SS w/ HOF 2011
and 1 index card also. The index card is for Arron(elmesero) and I told him I would give it to him but he has to make some kind of cut custom card.Not sure if the auto is too big to pull that off; but we shall see!! I figured I needed to keep the kid on his toes...ha ha

Gillick had quite a storied career as a Baseball front office guy. I always remember those Blue Jays teams in the early 90s... 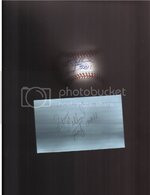 Thanks for reading!
CW

elmesero5 said:
Congrats on the success. I'll do my best to pull of a cut. I'm quite sure how to begin. This may require some research...Lol.
Click to expand...

Well I have enough trouble using photobucket I figured it was time for you, Jedi, to take it to the next level!!

65
4.70 star(s)
Lol. I will give it a try. Maybe next I can cut up that game used Wes Littleton jersey I have. All the possibilities. Lol.

Awesome success, Chris! I knew Gillick was going to be a good one when the Blue Jays quickly drafted the Indians hottest player, Rico Carty, in the expansion draft in the winter of '76. Gillick headed up player personnel for the Jays, at the time, and was the instrumental player involved in the drafting of Carty and the trading of Carty back to Cleveland. You see, the Indians figured no one would take Carty because of his age and left him unprotected in the first round. Tribe fans were furious when they let Carty get away. He was, after all, at the time...their lineup. To get him back, the Indians had to give up two up and coming players, Rick Cerone and John Lowenstein, who wound up having some pretty solid careers. Gillick always had a great eye for talent.

127
5.00 star(s)
thanks guys...Yes, Jim, Gillick really had a pretty remarkable career evaluating talent if you will..he really had some incredible teams.the 01 mariners were absolutely ridiculous at 116-46..he has been such a badas* one of the best Executives of my time following the Game...
Last edited: Dec 31, 2010

127
5.00 star(s)
thanks guys..i think it's worth giving him a shot...i have seen several successes via the Seattle address in the last 3 weeks.i did not include donation but i know some have put in $5 and gotten thank you notes back, too...