127
5.00 star(s)
A very generous trade from Jim(Houbb) arrived at my doorstep. I noticed J.R. Richard was going to be at a signing close to Jim; and Jim was considerate enough to attend and get it for me....My nephew will love these additions to his collection....

J.R. Richard OMLB with "78-79 King K's" one of the most underrated pitchers imo...for those who did not see much of him(myself included) go check out his stats from 76-80...pretty remarkable.

and the others in this are sweet, too!!(i dig the Winfield!) 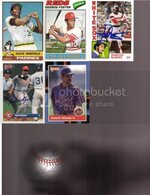 thanks for reading!!
CW

163
5.00 star(s)
most outstanding additions...I have been trying to get Baines TTM for a bit now, all look great

127
5.00 star(s)
thanks everyone!!once again, this is a superb illustration of why i enjoy The Bench and the great people on here...

levi said:
most outstanding additions...I have been trying to get Baines TTM for a bit now, all look great
Click to expand...

i have some others of him FT if you are interested...

It was my pleasure, Chris! I hope he enjoys the sigs!

For those of you wondering just how good J.R. was before his stroke in 1980, just remember one thing: In 1979 the Astros new owner, Dr. John McMullen, made Nolan Ryan, author of four no hitters (at the time) and the single season strikeout record holder the first $1 Million a year player in MLB. As great and as devastating as Ryan was, he was the number 3 starting pitcher on Houston's staff that season, behind Joe Niekro (#2) and Richard (#1). Yes, even Nolan will tell you J.R. threw harder. Both were just scary. Simply scary.

127
5.00 star(s)
thank you so much, Jim...
i will once again echo the fact that JR is probably one of the most underrated pitchers of all-time...that 5 year run is absolutely ridiculous...