511
5.00 star(s)
After several trades and many bids on eBay, I was able to finish the first two collecting goals I set for myself almost a year and a half ago when I got back into the hobby after being out for almost 20 years. My package from CheckOutMyCards came in the mail today, and contained my Sam Fuld Gold and Jim Edmonds Black cards: 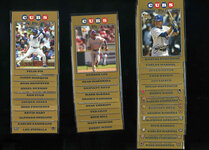 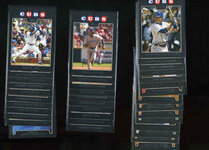 I also have the base set and the gold foil sets, but those were significantly easier. Bidding against the other Cub collectors sure hurt the pocketbook on some of the blacks, but in the end it was worth it, and now I can work on the other goals I've set for myself!

Special thanks go to loftheb, who set me up with an extra Lou Pinella black he had, and he sent it as a free card! As soon as I can return a comparable favor, I'll be sure to do so! Thanks to everyone who helped!

1,975
5.00 star(s)
Congrats
Nice job on finishing two of your goals. Good luck on your next project
Chief

766
5.00 star(s)
That really seems like an amazingly difficult feat- congrats

620
5.00 star(s)
That is awesome! It is always great to hear about people completing a goal. That is an accomplishment that should be celebrated.

Take care,
Dewayne
You must log in or register to reply here.