Larry Johnson signs another custom... so does Bob Malloy

Larry Doby Johnson liked my custom and requested more so I sent more his way. I also had come across another photo of him after I had sent the original request so I included more customs yet for him (different designs), he gladly signed another for me and sent it back.

He even wrote me a nice long email last week telling me to expect it back soon — I gave him my email in my 2nd letter stating if he needed more to just let me know... and well... he wants more again! lol... I don't mind tho. He was really nice and explained that he's mailed these to friends and family and they all got a kick out of it. His son who plays AA ball for Harrisburg (Nationals) really got a kick out of them too he said. He also said I was the best fan he's come across since his retirement and that I shouldn't have a problem getting many other players to sign for me. I must have made a good impression on him with my letter I guess... pretty cool.

so this time around he signed this custom 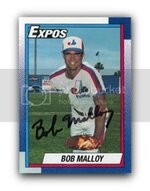 stlcardtrader said:
nice.. what type of stock do you print these on?
Click to expand...

I have an Epson printer and use Epson Photo Paper to print these:
http://epson.ca/cgi-bin/ceStore/ProductMediaSpec.jsp?BV_UseBVCookie=yes&infoType=Overview&oid=-8776&category=Paper+%26+Media

expos94 said:
I have an Epson printer and use Epson Photo Paper to print these:
http://epson.ca/cgi-bin/ceStore/ProductMediaSpec.jsp?BV_UseBVCookie=yes&infoType=Overview&oid=-8776&category=Paper+%26+Media

Congrats!!!!
They look so good that when players see them for the first time they want them all.
(Edwards Guzman,Francis Beltran and Orlando Merced)
Thanks again
Javier