109
5.00 star(s)
Since we have a showcase forum now, I thought I'd take the time to utilize it by showing off my Tony Parker PC. From time to time I'll try to share one of the cards from my PC in here, along with a little story about how that card, or cards, came to be in my PC.

As I do with all of these kinds of threads, I'm going to start it off with the pride and joy of my collection.

When I first started collecting Tony Parker I got one of his Topps Chrome rookies early. Not long after I realized that there was also a refractor and a black refractor. I made it a goal, at that point, to go after that little 3 card "rainbow". I was able to pick up the base refractor pretty quickly. So, the search began for the black refractor. Being it was numbered /50, the Spurs were on top of their game, and the card was over 5 years old already, I knew I'd have my work cut out for me. I checked everywhere. Every forum, eBay, COMC, and I was even trying to use Google to lead me to a trade list from someone who might have the refractors.

Finally, one day when I was browsing eBay, actually just looking for any Tony Parker cards I didn't have, I saw one. I knew, regardless of the price, that one was coming home. To this day I can't remember what I paid for it (somewhere between $100-200), but it was definitely the most I've ever spent for a single card. It wasn't crazy expensive, but it was enough that I was thinking "what have I done" afterwards. At this time I hadn't been collecting long so I thought it was pretty crazy to spend over $100 on a card.

When I finally got the card I was pretty amazed at how beautiful it was. Not only is it a great looking card, on its own, the condition of the card stood out from the start. It was a little (or a lot) off center, but other than that I didn't see a single thing wrong with it. So I decided to spend a little more money on it and send it off to Beckett for grading. I put a "minimum 9 or no grade" on it, just because I didn't want to get it back as an 8 because of the centering. Turns out I was right on the condition, and the centering, as it received a 9.5 across the board, with an 8.5 centering. So, it made my minimum.

So, here's a look at the only card I've ever sent in for grading, and the pride and joy of my Tony Parker collection. 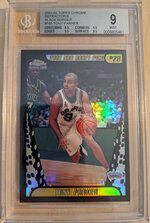 Loyalty32 said:
I'd guess that card goes for much more today!
Click to expand...

If so, may be worth resubbing that bad boy!

Loyalty32 said:
Am I correct that if you can get that Centering up to a 9, that card becomes a BGS 9.5?

If so, may be worth resubbing that bad boy!
Click to expand...

That is correct, but I don't think it would happen. I've honestly thought that maybe the only reason it got the 8.5 centering is because of the "minimum 9" I added to the submission and hey wouldn't have gotten as much money from me had it not graded out. I wouldn't want to risk sending it back and the next guy deciding that it didn't deserve the 8.5, drop it to an 8, and my overall grade goes to 8.5.

I knew what it was went I sent it in, and I knew I'd be happy if it came back as a 9. I never even considered that it might grade at a 9.5. I'm still just absolutely thrilled to have it as a 9.
You must log in or register to reply here.