551
5.00 star(s)
BANNED
My wife and I went out to the bar last night to see Neal McCoy perform after we won tickets through the text club w/ a local country station. I didn't know if I would be able to get him to stop for me, but took a chance and asked Bill to make a couple customs for me just in case. We got there and listened to the opening band (www.myspace.com/autumnrisen) and I started talking to the bass player after they were done playing and asked him if they had any cds with them. He said they were already out, but to come hang out with them backstage for a little bit and I could probably meet Neal McCoy before he went on stage. We hung out with them for about 15 minutes and then he started walking our way after his meet & greet with fan club people. I let him talk with the opening band first, and then when he walked up to me and told him that I was from Nacogdoches, TX and he said "NO SH*T!?! You know I lived in Jacksonville, TX about an hour away right??" I told him that I had a aunt that still lives in Jacksonville and he said "NO SH*T!!! That's awesome!" Haha. He curses like a sailor, but was really laid back and was great taking time talking to everyone. He signed 4 photos for me, and personzlied a photo to my mom and one to my aunt as well. 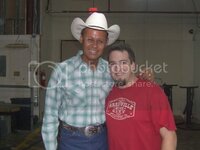 551
5.00 star(s)
BANNED
Thanks guys. He asked where the pictures were from and I told him they were founf online but I had seen him perform before at Six Flags Over Texas a few years ago and he remembered doing that show. He did say "how many of these damn things you have for me to sign??" Lol.
H

He is a very cool guy! Congrats on a terrific success, Andrew!

question about a member