348
4.90 star(s)
Was great til the trainwreck that happened once Puddle of Mudd hit the stage. Silverstone really impressed me, Cavo was great. Then there was Puddle of Mudd. Well people on stage started throwing out glow sticks into the crowd, and they were definately throwing them. Well someone decided to throw one back on stage and barely hit Wes the lead singer of Puddle of Mudd. Didn't even phase him til about halfway thru the next song and thats when everything went downhill. He was flipping out and walked off stage 3x before the night was over and other then the first time, which was understandable nobody knew why he did the last 2 times. 2 songs he basically didn't sing at all and then for the last song he said his voice was shot and was gonna need help and only sang half of it. Which since it was She Hates Me, it didn't matter anyways because half the crowd was gonna be singing anyways. Then once the song was over he said he was gonna come out and sign whatever anybody wanted for whoever. Well I waited about 45 minutes, and security had already told people they aren't coming out so leave. Cavo told me in a email before the show they would be signing afterwards, didn't happen. Kinda think nobody wanted to deal with the pissed off/dissapointed crowd Wes had created. Needless to say I did end up seeing Wes and he offered to sign my drumhead without me asking in such a nice way. Told him no thanks don't want yours anymore I'm gonna have Silverstone sign it who I hadn't heard of til tonight. Think the band was kinda shocked and thought I planned on getting others to sign it as well. They asked how I enjoyed the show, told em it was good til I think you know what point and they seemed to agree. It seems everytime I go see a concert at this specific venue someone always threatens to walk off and leave, don't know why and its always over small things. Either way I didn't leave empty handed, didn't pay for the show other then the $5 beers so can't complain really I suppose. But I will say the lead singer of Silverstone definately can sing. 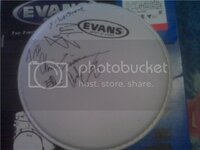 28
5.00 star(s)
Too bad the show turned out like that. At least you enjoyed the other bands and got the drum head signed.

34
5.00 star(s)
man wes sounds like he was having rock star syndrome on stage i hate that... but that drum head looks sweet signed congrats!!!!
A

127
5.00 star(s)
i forgot that jered weaver was the lead singer of puddle of mudd...or maybe it's jeff....does wes have a nasty slider? oh well, congrats on silverstone. nice job

7
I'll have to check out Silverstone.
You must log in or register to reply here.