127
5.00 star(s)
Thought I would include my day in addition to Darrell's(halk) write-up....Fun day at the ballpark, gotta love a 12 inning win over your division rivals....

Here is what we brought home...

My nephews also got 2 ROMLB thrown to them during the game(we were sitting behind A's dugout) and one of them got Rajai Davis' wristband after the game. For some reason, he thought that was "so awesome."

Thanks again to halk for his graphing expertise and help! 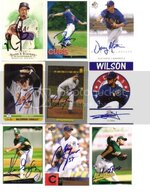 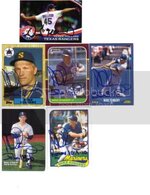 185
5.00 star(s)
welcome man, hopefully next time more guys will stop when you come out to the tunnel

127
5.00 star(s)
no worries, i had a great time. hope this rain subsides...looking forward to see what the air hogs game will be like tonight..enjoy your weekend!!

rangersfan1982 said:
Good stuff bro...do you have an extra unsigned copy of that Mathis card?
Click to expand...

sorry, that was the only one i had...i think i got if off sportlots.

381
4.90 star(s)
rangersfan, I have an unsigned copy of the Mathis available.

Good job w/ all the Rangers!
You must log in or register to reply here.

Everything Now 20% Off Listed Price! HUGE List Of Basketball Cards For Sale!