32
4.90 star(s)
Continuing the trend of bands/music I listened to growing up and I have seen live, went for Snoop Dogg. Went to the hotel he was staying at and had a seat on the couch by the elevator area where he would come out. About 10 minutes after I got there a few larger guys in suits came down and were walking around and after about 10 minutes I noticed they kept looking at me. I was wearing a blue hoodie jacket and had my hands in the pockets since it was chilly in there. Next thing I know 2 of his 'people' come up to me and a hotel person is standing back aways behind them and ask why I am there. I told them I wanted to meet Snoop. They said 'We notice you have your hands in your pockets. What you got in there your hiding?' I didnt even think about the gang stuff with him and that it looked like I was 'hiding something' I told them all I had was a marker which I pulled out. THey then had me empty my other pocket and pull back my jacket to show there was nothing under it and agreed I was cool. He then ended up bein real cool and introduced himself and told me to be cool about it and let the kids go first(a few kids were on the other side of the elevators) and he would sign 1 thing for me and if I was wanting Method Man and Redman that they had already left. Snoop came out and was cool about it and signed the photo I had. Would have liked to gotten a pic but he took off pretty quick after signing my photo.

278
5.00 star(s)
ya i got him here in long beach at a baskeball event....his body gaurds are HUGE! im 6'4" they are bigger than me. he only autoed for me after the game and dipped in his van. he was cool. got a baseball auto by him.

32
4.90 star(s)
They were definately huge...and was definately uncomfortable for the time I was getting watched and 'shaken' down...but ended up being a good time after that...guess he did end up signing for 2 more at the venue with 'SD' graph and that was about it 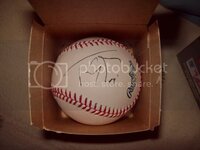 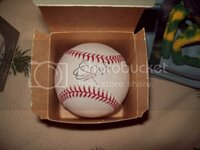 348
4.90 star(s)
congrats, when I got Floyd Mayweather years ago at one of the malls here his body guards stopped me about 10 ft from him and was all "whoa whoa whoa" told them I was wanting an autograph from the champ and they was like ok no problem we just had to make sure ya wasnt gonna try beating him up which I found pretty funny. Then told me just don't go running around telling everyone because we have been here an hour and nobody has even looked at him twice but you so far. When I went to the Snoop concert when he was here I tried getting him and almost did at the venue after the show until finally one of his bodyguards realized that I wasn't one of the girls they let back there and stopped me about 15-20 ft from Snoop