Team for Team Insert/parallel trading (You send me Dodgers, I send you your team)

621
5.00 star(s)
Thought I might try this again. This could be the easiest trading you have ever done if you have a similar mindset as me. I sort out all of my commons and either donate or trade/sell them as bulk. I set aside all of the stuff that wasn't basic pack pulled base cards though in hopes of trading for similar Dodgers. I probably have 6-7K worth of this type of thing. It's mostly older (early 2000s and back). Some teams have better variety. It really depends on who they were and what boxes I broke. There is some minor duplication. I may have 2-3 of the same card sometimes, and in some rare cases even more (89 Score Rookie/Traded for example). Usually this is from traded boxed sets that got busted. I can pull all dupes if you are opposed to getting any, but I would be expecting this only on the larger scale trades. As far as I am concerned, these are junk cards that only have value to a dedicated team collector like myself.

Here is my proposal...I will count out the cards for your team and you'll trade me an equal number of Dodgers. I don't care if there is minor duplication and I don't care what you send, as long as it is not a base card. It could be from an 80s box set, a parallel, a food oddball, a traded set , a sticker or anything else that was not a base card from a pack. There are also minor league affiliates as well, but usually a very small percentage. Some teams have partial minor league team sets that were broken for big stars. Everything will be your team of their minor league affiliates.

Because the cost of shipping can quickly exceed the value of these trades, I would ask that we only do as large a trade as possible. I am not looking for 10-20 card deals, sorry but it just isn't worth the cost. I am limited on some teams, but others I have a lot. A few teams are unavailable, the Dodgers being the obvious one. I also do not have any Yankees as this team is claimed in a long term trade deal I have with someone, where we do just this.

Even better if you have a large number and want multiple teams. I don't care what you take from me as long as it's matched with Dodgers!

Here is an example of the quantity. California Angels = 274 cards

Refractors, press proofs, silver signatures, gold rush, tiffany, minor league team set cards, promo are some of the cards that I have available for some of the teams. ALL COMMONS. Come into this with the expectation that you'll get a box of scrubs of your team and this trade will be smooth for both parties.

I know this takes a special kind of collector to match up a team trade like this, but I hope to at least find a couple for the 25+ teams out there. Let me know what quantity of Dodgers you have to trade and let's see about making a deal that benefits the both of us. I am going to try to cross post this, so first come first serve on a team/deal. Thank you. 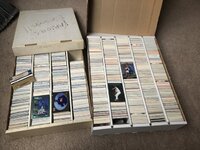 If you could LMK what you have in Phillies, I'm sure we can work out a trade. I'm not really looking for duplicates, but need a bunch of common parallels from the early 2000's. Not really interested in anything earlier, but would possibly take refractors, press proofs, etc from the late 90's.

621
5.00 star(s)
I know its not a great photo, but it's late and i have no room right now to spread out. i picked out everything that looked newer. Some may be 90s. Some may not be inserts or parallels. I really am not all that versed in 2000 and newer stuff, mainly because i stopped buying packs and unless Garvey was in the set, I didn't care. I can't read the damn backs any longer either, with good light and glasses. I sound like an old man, because i basically am now!

Maybe 2 dozen cards, so probably not worth a trade, but if you had any interest, I could come up with a price. I am not really looking to sell singles or do a pick and choose at this time, but maybe someday it will come to that or just a huge fire sale for the whole box!

My hope was that I could shop off some bulk teams to other collectors similar to me, get some Dodgers in return, make it worth the shipping and not worry about value, since they are all commons. I would prefer for someone to take/match my entire lot by team, but I guess that kind of trading is all but dead these days. 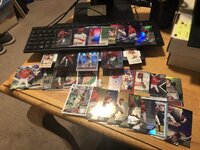 And I just realized that I didn't check the 5K box! There are more potentially. Will follow up in the next couple of days...
You must log in or register to reply here.