185
5.00 star(s)
I wanted to jump back here on the Bench and start participating again in building my sets and sharing autograph successes. Also wanted to share with you a few signings I have coming up with Dwight Evans, Robby Thompson and Cliff Lee. 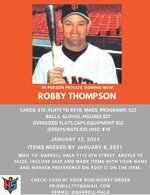 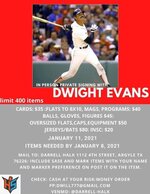 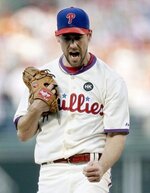 Halkman Sports has been approved to take items for the upcoming CLIFF LEE signing in association with SI Kings. All items will be signed in person and handled by longtime professionals in the business.

Date: Signing will take place in mid January but all items must be in my hands by December 31. No exceptions. Late items will be returned unsigned.

Return shipping required or include a stamped envelope at your risk. We are not responsible for items lost by the Postal Service.

214
5.00 star(s)
Hello my friend, how have you been!! Great to see you back on here Darrell, and so happy to see you are still collecting and in the private signing business!

Enjoy your Holiday Season with your family!

185
5.00 star(s)
Doing good Kevin, been awhile but yes I am still collecting and running Private signings

thehalk said:
Doing good Kevin, been awhile but yes I am still collecting and running Private signings
Click to expand...

Was interested in getting Robby to sign a custom card of my own creation, would that be possible?
Last edited: Dec 16, 2020

KCLJ520 said:
Was interested in getting Robby to sign a custom card of my own creation, would that be possible? Wasn't sure if that was a possibility?
Click to expand...

Yes that is totally possible.

thehalk said:
Yes that is totally possible.
Click to expand...

Fantastic! Let me get to work on one, and I will be in touch, thank you my friend!

KCLJ520 said:
Fantastic! Let me get to work on one, and I will be in touch, thank you my friend!
Click to expand...

793
4.90 star(s)
$99. for a card from a player who is not a HOFer? Cliff Lee is pretty full of himself.... that being said, I participated in an earlier Evans signing and Darrell took care of my stuff professionally.
Last edited: Dec 16, 2020

621
5.00 star(s)
Welcome back, I too recently came back after a long stretch of very infrequent posting and some lurking. I have somewhat been watching your activity (and many others) on a few facebook signing groups and sounds like you are one of the good ones. I wish you the best.

Somewhat related, but not directed at or about you...I have yet to try to send in anything for a signing recently, the last being Dick Allen many years back for $35 and thinking that was too high, but really needing a specific item signed, mainly because I have found the prices to be so much higher than I would expect, kind of like t.rooster said above about Lee. I know it is set by the players usually and i would say the market should correct those who are too high, but as I will note shortly, enough people are still happily paying those "huge" asking prices. With Lee, for example, I have won several of his certified auto cards for under $5 and that is perfectly good for me as I buy a lot of my stuff on ebay and I rarely care what I am getting as long as it's a certified auto. I would think nobody would pay $99 for him, but I would be WRONG! Eventually a signing will drop in my lap that works for me as both a decent price and a player I want something specific for. The closest i have come since joining these facebook groups was a Sergio Robles signing. I still couldn't quite pull the trigger though.

I got sidetracked a little, but what I really wanted to say was that I am blown away daily by what people will pay for stuff, prices I felt were WAY over market value, including some of the bigger name signings. And because of that, the prices we see for a lot of these private signings that have become extremely popular this year especially, ARE reflective of the market, at least those participating on facebook groups and spending their dollars. Maybe Covid twisted that a little too with bored people just looking to spend money they otherwise normally spent elsewhere in a crowded society, I guess we'll hopefully see soon when things return to normal, if this spending spree continues. For me, it was a realization that more people than I expected are willing to pay whatever it takes to get the item they want and guys like me are maybe in the minority, long time collectors who are shopping around and making our dollars stretch as far as they can and will take that $5 certified card purchase over a private signing more often than not.

158
5.00 star(s)
Welcome back Darrell. I remember getting a couple of sigs from you back in the day. One of them being Brooks Keishnick, on a photo that I had taken at a Brewers v Twins game in the early 2000's. Do you have a website, that you advertise your signings on?

And as to MrMopar's thoughts, Ive noticed the ridiculous prices people are paying as well. A local card shop here that specializes in signings has a whole new list on their website and the run reasonable Robin Yount 49.99 for cards up to a hundred or so for Dave Winfield. Granted both are HOFers, but especially in WI 50.00 bucks for a Yount is incredibly reasonable.
You must log in or register to reply here.

This FTL is now outdated, please check my new one