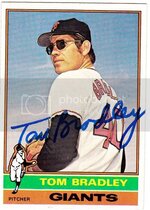 One of the coolest 76 topps. Reminds me of "No Country For Old Men". Maybe it's the glasses. 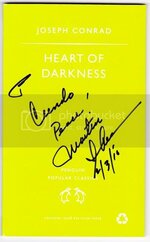 I asked Martin Sheen to sign this book for a friend and he included two of the photos below signed as well as my original letter signed. Pretty amazing and I got it back in less than a week! 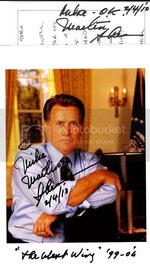 8
great stuff! oh man, if you could brandow and coppola on there too that would be amazing! congrats!!!

8
ps Tom Bradley does look "No Country for Old Men" or Jim Jones.

LOL! When I first heard about Jim Jones in 1978, and saw videos of him on tv with those sunglassses of us, Bradleys '76 card was the first thing I thought of! I can't believe you guys were thinking the same thing 30years later. That's funny! And a great success!

I love the Sheen, as well! He was terrific in "West Wing!" The one thing that always bothered me on that show was how every character in the White House had the same sense of dry humor. Even if you introduced a new character, he/she also had the same sense of humor. However, it always seemed the Republicans had none. Biased, maybe?