Mr. Reuss had an awesome career. That's one of the great things about working on an autographed set from your birth year. Researching the players allows you to learn great new facts and stats you may have never known.

...from Wikipedia:
-Reuss played for eight teams in his major league career;
-Reuss is the only Pirate to have played for Danny Murtaugh, Chuck Tanner, and Jim Leyland
-He was the third oldest active player when he retired at age 41 in 1990, and was one of a few players in major league history to play in four different decades.
-In 1988 he became the third pitcher in history, joining Milt Pappas and Dennis Martinez, to win 200 career games without ever winning 20 in a single season.
-In 1980 Reuss had one of the best seasons of his career with eighteen wins and only six losses, and leading the majors in shutouts with six; he also threw a no-hitter against the San Francisco Giants on June 27, striking out only 2 batters, narrowly missing a perfect game due to a throwing error in the first inning by shortstop Bill Russell. Reuss finished second behind Steve Carlton in the running for the Cy Young Award, and won the MLB Comeback Player of the Year Award. 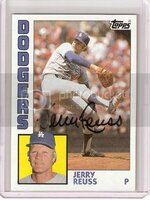 57
4.90 star(s)
Nice success! Cool idea with autographs on a set from the year you were born. I was born in '95, so a whole different era about than this!

kugelmanco said:
That's one of the great things about working on an autographed set from your birth year. Researching the players allows you to learn great new facts and stats you may have never known.
Click to expand...

I'm not even doing a set from my birth year and I still always find out stuff about players that I never knew. It's also interesting to see what they are doing post-retirement, etc.

He was to be the Opening Day starter for the Dodgers in 1981, but he hurt his leg the night before the game. Tommy Lasorda, after weighing his options, chose a pretty much unheard-of rookie to start in his place. A guy who had not really been all that impressive in two brief relief appearances late the year before. The unimpressive thing did not carry over to 1981 however. The pitcher?????? 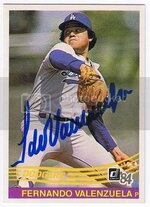 Reuss was awesome! I loved watching him pitch! Still can't believe the Astros let him get away. Terrific success!