413
5.00 star(s)
Many thanks to ryanrancho, a relatively new member here. I saw that he had listed a few cards from the set on ebay, so I suspected that he was breaking up his partial set. I sent him an email asking if he had anything that I needed and if so, if he would kindly sell to me directly. Of my 7 remaining needs, he had 6. He gave me a phenomenal deal on 5 of them. The sixth (Sean Casey), someone else wanted, so he listed it for auction. Unfortunately, I forgot to set the snipe and didn't win it, but when you have a 2-year-old, you find better ways to spend your time than in front of a computer or sitting amongst boxes of cards.

Nevertheless, the five arrived today, putting me two short of the complete set. I still need one for Series 1 (#196 Scott Hunter) and one for Series 2 (#236 Sean Casey). Here are the scans:

Again, many thanks to ryanrancho and all of you who have helped me along on this adventure!

My pleasure, B. After 10 years and 26 cards short of the set (415/440), I finally decided to break my set. I'll keep a few favorites but will probably auction them off over time.

413
5.00 star(s)
Looks like you're doing pretty well on recouping some of that investment. 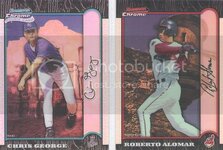 jaderock said:
Craps...now I can't help you on this set! That is awesome - you are down to 2!
Click to expand...

Wish I'd known! Oh well. Thanks anyway!
You must log in or register to reply here.