C.J. Nitkowski - 2/0
^I had been e-mailing him for a couple months since he was playing over in Japan, and he told me that he did not have a box over there to send auto requests to, but he would send me a couple of cards when he got back in the states - so I recieved one of his Japanese cards & a Yankees card that one of his friends at Topps made that wasn't ever released. No Rangers card unfortunately, but maybe I will be able to come across one eventually.

My wife and I went to the Hard Rock Casino to see Darius Rucker and he put on an awesome show. We had seen him once earlier in the year when he was touring w/ Brad Paisley and this time we managed to get up on the front row. Halfway through his set he saw me holding my 8x10 photos and told me he would get one for me after he was **** playing. After his encore, he came over and grabbed one of my photos and signed 1/2 for me. Nice pickup from the former Hootie & The Blowfish singer!

Here is the big news, I got a job with the Mississippi Surge hockey team selling merchandise during games. It's not a huge job, but it is a foot in the door that can hopefully turn into something else over time. We went to the game last night and I ended up getting the entire team on some customs cards that Bill made me and also got the last two on my program that I needed too! Here is what I came away with:

That is awesome, Andrew! Congrats on the successes and the job! I hope that works out the way you want, as well!

Bill, I am gonna send ya an e-mail later. There are a couple guys who got added to the roster this weekend.

170
4.90 star(s)
Hey, I don't know if you do photos or not, but I got the following pic from CJ a few years back. If you want it would you be interested in trading one of the cards for it as its the only auto I have of him. 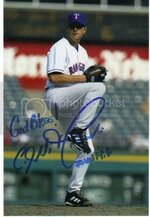 Ellis_Shoe: I would be willing to trade the Yankees card, but will probably hang onto the Japanse card.

metro: My scanner is still out and my cord for my digital camera isn't working right now. Hope to get a new one for Christmas if I'm a good boy.

28
5.00 star(s)
Nitkowski is a great person. I had emailed him asking how much I should send him to cover the return postage from Japan and he told me that he would cover it if it was just a small envelope.