551
5.00 star(s)
BANNED
Went to the BayBears vs. Lookouts game last night. I got there as it was starting so I didn't get to graph before which slowed me down a little bit. I also didn't know that in a minor league double header they only play 7 innings and not a full 9. I think I did decent even though I had to do most of the work after. I got the BayBears as they were leaving the field and got Danny Darwin as he was getting on the bus after the game. He seemed like he was in a bad mood, but I would be too after losing both games, haha. Not a bad night though... 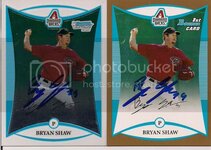 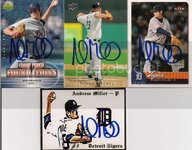 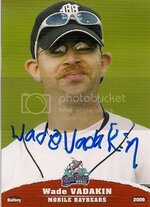 Wade is one of the BayBears bayboys...he has a really bad case of diabetes and something else that I'm not sure about. It's sad watching him walk around the field like he does, but he's a clown at the same time so I know he is out there having a good time. He was loving all the auto requests last night so I figured I would get him to sign my set card for me.

7
Those are some great pickups and the last one is priceless. Anytime you make someone smile, you can't put a value on that! Congrats, Pat

34
5.00 star(s)
great pick ups congrats!!! that vadakin is priceless im sure you made his day for asking for his auto which is very cool...

348
4.90 star(s)
I'm sure Dr Death would sign as many as you handed him to be honest unless they were all multiples.

551
5.00 star(s)
BANNED
He signs dups too...the only reason I didn't give them all to him last night was because he was getting ready to head out and get on the bus. Was good to meet him though.

348
4.90 star(s)
oh i know he will sign dups just saying he probably would've signed whole stack unless they were all the same 1 or 2 cards
H

Darwin is a very cool guy. Congrats on those nice pick ups, Andrew!