got this for $25 from his library. 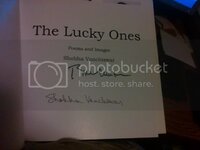 237
5.00 star(s)
pretty cool...he didn't write the book, but all the money from the book sales go to his charity foundation...so they put these books up for sale and he signed a few of them to get the sales going...sold out in a day...i was lucky enough to get one of the signed books.

208
5.00 star(s)
Very nice! I got to see him in Helena when he was campaigning for Hillary, very cool to be in the same room.
H

I met him when he was down here in Houston campaigning for her in '08. Seemed like a pretty cool guy. When He and George H.W. Bush teamed up for the Tsunami Relief, President Bush was really touched by something President Clinton did. The plane they were flying on had only one bed and there were the two of them. President Clinton deferred to President Bush and let him sleep on the bed, as he was elder. President Clinton, in turn, curled up under a blanket on the floor of the plane. Since the two of them left the White House they actually seem to have become pretty good friends, just like President Ford and President Carter. That is a pretty amazing pick up! Congrats!

WTT BOOK: "Fumble! The Browns, Modell and the Move: An Insider's Story"