Thanks to selling some stuff on ebay, but mostly from helping Boots with his want list, I decided to treat myself to some boxes. Kept watching Blowcards.com for something super and saw they had boxes of 2008 SPx baseball for $59.99. Couldn't afford it when it first came out, as boxes were going for over $100 each. Each box comes with 10 packs, with a guaranteed hit in every pack and lots of Junior autographs and Kershaw autographed RC.
I have opened the first two boxes and, I am glad I did, before watching box breaks on Youtube, as I did a whole lot better than the boxes I saw busted.
Just listing the first box now, since I should have been in bed an hour ago. First surprise was every box has a bonus pack that includes an auto and a yankee legacy card (did we finish that set?) The one is Winfield 5078
Base: all Die cut
4 5 17 19 28 29 43 51 53 67 75 77 79 91 99

2008 SPx Winning Trios Silver Limited Patch #BHJ Adrian Beltre/Felix Hernandez/Kenji Johjima Team: Seattle Mariners 13/25 beautiful patches with two near definite HOFs!
Will post scans when I get a chance.
Will list box two when I get a chance...since "She Who Must Be Obeyed" wants the family room cleaned.

Oh, by the way, the last two packs of box 2, blew box 1 away.
Thanks for looking.

The nice thing that prompted me to go ahead, was there are only four redemption cards. 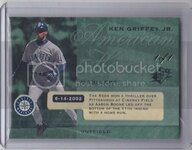 1,335
5.00 star(s)
That's a great Griffey 1/1... why do they mention a Reds/Pirates game that Aaron Boone won on a Griffey Mariners card?!
You must log in or register to reply here.