30
4.90 star(s)
Today I went to the Hudson Valley Renegades @ Brooklyn Cyclones game. I was one of the first people on line and just talked to a couple guys before the gate opened. I ran with 3 other kids and we got spots right next to the Cyclones dugout. Beltran came out late after all the Cyclones came out. Beltran did his own stretching and ran laps while the other players played catch. He started signing a lot of autographs down the right field line then he came over by the dugout and only signed 4 or 5 autographs. I was the last person he signed for. My sharpie dropped after he put it on my photo and he picked it up then handed my sharpie to me before running inside the clubhouse. I left around at the top of the 5th. In his first AB, Beltran hit an RBI single. He walked on his 2nd time up and was picked off by the catcher after Luis Rivera struck out. There were loud cheers when Beltran stepped up to the plate, but boos when he got picked off. 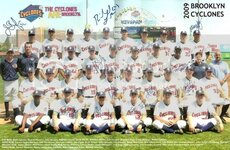 now i can kick myself in the ass for not going....

i did not think he would sign, guess i was wrong

I was thinking the same thing. I almost ditched dinner with the family last night (my mom's b-day) to go to the Cyclones game (I work in Brooklyn so it's a 20-30 minute subway ride to Keyspan Park). Then decided I should do the right thing and wish Mom a happy birthday and all that. I don't regret it.

But perhaps there will be another opportunity...don't know if Beltran will suit up for the Cyclones tonight or tomorrow.

I thought this was just the coolest ever