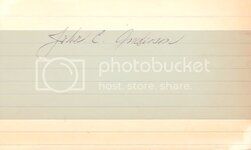 There are three reasons he is so tough:

1) He died in 1998.
2) He only played 10 games for the Colt .45s, so demand for his autographs was pretty low.
3) He has the same name as a country music singer, former governor, former hockey player, and a former football player. Do a search on eBay for "John Anderson auto*" and you'll see how many famous people share his name. So finding his uncommon autograph in the midst of all of those autographs is tough. This was only the second one I've ever seen.

Make sure to tell Darrell. He needs a little more jealousy in his life.
H

Nice addition, Billy! He is a tough one, I understand. Same thing with Pidge Browne. It's the lesser known players, who have since left us, who are always the toughest simply because there aren't that many examples of those players around.

Therion said:
Make sure to tell Darrell. He needs a little more jealousy in his life.
Click to expand...

I dunno, his Astros collection is pretty impressive. I got to check it out when I was in Dallas last month...not bad so far, but I'm sure he doesn't have one of these yet!