348
4.90 star(s)
These are on my 86 yearbook already signed by Sparky Anderson, Dave Bergman, Frank Tanana and Bill Freehan 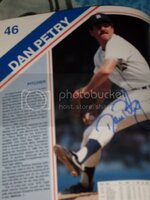 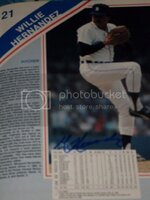 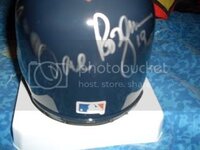 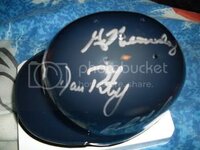 Dave Rozema-wasn't going to have him sign a ball then kinda felt like I should because he was being extremely friendly and I didn't have any of his cards besides the one that I already had signed by him so had him sign the Trump Sig Series ball I brought with since my buddy got my mini helmet signed for me since they were 1 per while I got the yearbook signed and I didn't wanna seem like a....and be like oh I don't want your signature I was just here for Hernandez and Petry lol

Tigers prospect Casey Crosby, if I had to pick one person from the Whitecaps this year that would make it other then Alex Avilia who I don't know how he made it up this year over Jordan Newton besides the fact his dad is a VP with the Tigers it would be him I picked to make it to the Tigers, and for the record Avilia was a complete jerk while here with the Whitecaps....Single A

San Diego Padres Prospect Jaff Decker, 1 of them is already traded, hence why I decided to get him since I was after him anyways

305
5.00 star(s)
Congrats! I wasnt able to go unfortunately. Also I thought it was supposed to be Milt Wilcox? When did they change it to Dave Rozema?

348
4.90 star(s)
I didn't notice they swapped Rozema for Wilcox until last week, and I called him Willie when I talked to him about if he was gonna head to Detroit and catch any Tigers games while he was in the states, just a heads up if the promoter that was there sitting next to Willie the whole night and handing out flyers for some card show around Detroit you probably will only be able to get 1 per unless he isn't paying attention because he told someone in front of me only 1, thus why I didn't try my luck with any of the cards I brought but good luck
Last edited: Aug 29, 2009

Who has quarters? Lots of great cards starting at 25 cents!
2

Introducing the "Garvey a day" thread
2