256
5.00 star(s)
I first would like to apologize up front for the fairly long read that I'm sure this will end up being. I like to share my full experiences and opinions on some players I see/meet. Well here's what I've got for all from my weekend IP experiences in Chicago....

I arrive at the park so that I'm ready to go when the gates open an hour and a half before game time, I have seats on the third base side 10 rows back on the White Sox side but the A's were taking BP as I arrived. I wound up camping about halfway in down the right field line waiting to see if any pitchers would sign on their way in. And right as I settle in, a family who must've known MARK ELLIS comes and calls him over. They had nothing for him to sign as they just wanted to talk so myself and a couple other autograph seekers took the opportunity to have Mark sign our memorabilia. So now I'm pretty excited, 2 minutes and already an Auto today could turn out well. There wasn't much action going on near my spot so I decided to move up right above where the players walk in to the dugout. I am honestly the only one there which astonished me because usually the spot is the most crowded. First to walk in is Coco Crisp, I call his name, and not even a look up. No worries I'll move to the next one. Unfortunately no other players came walking in until the end of BP. I had to seek out one in particular and wouldn't you know there was the A's original All-Star TREVOR CAHILL. Trevor very politely signed my ball and was about to head in when a very young child wanted to get an autograph but had no pen. I tossed the kid and his father my pen, and Trevor took notice as he threw the pen back up to me once he had finished. Didn't have anymore Autos or player interactions this game so now to my evaluation of the park...

This was the 16th stadium I have been, and it was in fairly good shape and condition. There was very little leg room compared to most parks which was a negative, but there was a decent food selection which helped to make up for it. Overall I would rate US Cellular Field somewhere in the middle of the stadiums I have been too: nothing special but nothing too bad about it either.

I decided to get to this game about 3 and a half to 4 hours early because I wanted to walk around the area of the park to see what it was like. I was very lucky I chose to come so early because I noticed fans were lining up meeting players as they stepped out of their taxis in hopes of getting autographs. Here's my list of interactions (not all signed for me):

Latroy Hawkins: This was the first player I noticed to go into the stadium, so I did not have time to arrange my ROMLB and pen to attempt to have him sign, but he did sign for about 10 fans or so and then walked into the stadium

DAVID RISKE: This was the first player I was able to get to sign and boy was he generous. He literally signed for every single fan who wanted an autograph and was super gracious about the process. He asked where I wanted the signature and started a small conversation as well. He seemed to be a great guy.

JIM EDMONDS: Jim was probably the most gracious there and at first it seemed as if he wasn't going to sign for many people, but he wound up signing for quite a few and struck up conversations. He seemed like a genuinely good person and certainly gained another fan in me with the way he treated everyone. I was lucky that he signed for me.

Ryan Braun: By far the most rude of all the players, just looking down, shaking his head saying I'm not signing today to everyone who asked. While I realize that many players may not want to sign all of the time, I felt Braun was the worst "sport" about it.

Corey Hart: From what I have heard Corey is usually a fantastic signer. This day he didn't sign for many but was upbeat and cheery saying that he'll definitely sign in the stadium. Seemed like a good guy. Unfortunately I wasn't one of the 5 or so that he signed for

ALCIDES ESCOBAR: Pulled up and started signing for quite a few people (including me ). Didn't talk much but signed for a little while and then walked in the stadium. Glad I was able to get him

Prince Fielder: After I had given up that all players were in the stadium, I noticed a swarm of people across the street. It turns out that Prince Fielder had arrived. He signed for quite a few people and seemed fairly gracious about the process. Unforunately I was one of about 10 or 15 he left empty-handed before walking inside. I still greatly admired the way he appreciated his fan

All in all I was very surpised that Wrigley still had it where the fans had access to the players as they were coming in the stadium. It seems like a potentially dangerous situation to me, which is why almost all other teams have made it so the players come in behind closed gates. Inside Wrigley was nearly impossible to get autographs so I was done there, but here was my impression of the stadium....

So in the end I came home with 5 Autos on ROMLB:

It was a great trip and great experience! I will be putting pics of the Autos in my bucket and will post a link here when I do so. 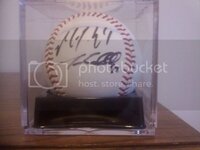 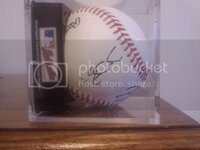 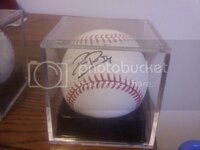 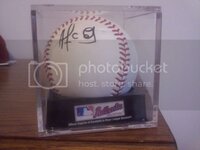 127
5.00 star(s)
thanks for the write-up...i have attended a few Rangers games against Oakland and cahill and ellis are very gracious there as well...and crisp did not look up either!!

335
5.00 star(s)
Wow, Thats awesome. It is fun seeing the players come in/out of the stadiums. A few years ago I was able to go to Fenway and see all the Sox players leave. Congrats on the signatures, I am glad to know that David Riske is still being a nice guy.

1,027
5.00 star(s)
very nice pickups! and sounds like a great experience indeed
congrats
You must log in or register to reply here.

About to dive in to a sea of baseball
2 3