2,068
5.00 star(s)
Busy last few days. Went to the Giants official opening day party on Monday, they let people go on the field and watch the Giants vs. Astros game on the HD bigscreen. Vida Blue and Jeff Leonard were on hand signing autos and taking pics with fans. Never met Leonard before, he was a great Giant and really nice!(heard mixed reviews on him) Also, I had Vida sign a 02 Topps Tribute card which he had never seen before, there is a pic below of him looking it over and reading it. Also handed out rawlings real leather baseballs & foam fingers to the first 2,000 fans. I've been to several dozen bb giveaways these are the best I've seen.
Tuesday I went to the Rivercats vs. Ports exhibition(A's AAA vs. A) and did very well. My friend got 2 game used Corey Wimberly jerseys signed, and I cleaned up on the cards of the guys. Nice to get Steve Scarsone for my Giants collection and Oak Top Prospects Chris Carter & Michael Taylor. Ticket is signed by Grant Green. Check out scans and proof pics below. 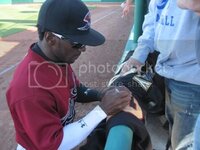 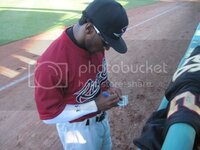 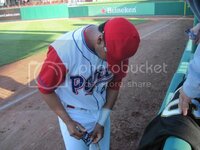 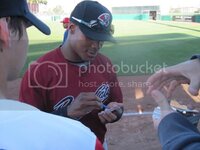 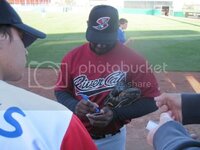 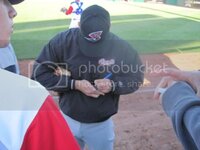 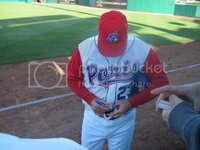 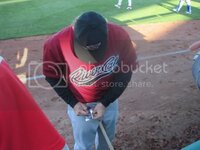 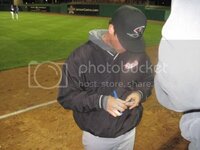 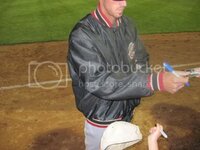 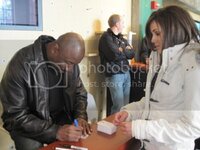 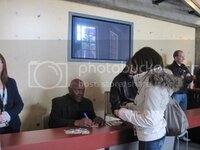 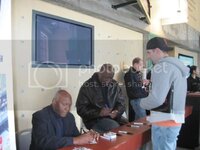 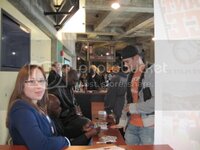 128
5.00 star(s)
nice pickups
is that your girlfriend lol she is pretty
congrats!!

551
5.00 star(s)
BANNED
Awesome stuff. I am hoping I can pull off hauls like that once I start going to games. I have 19 cards for Scott Coolbaugh when OKC plays in New Orleans. I'll prob try to span it out over a couple of days or something.

Haha, I actually said that to him "one flap down baby!" He said "yup!"
A

NYMets6986 said:
nice pickups
is that your girlfriend lol she is pretty
congrats!!
Click to expand...

lol yeah she helps me out when I need it. She loves that Keough guy, I guess his mom is a former PB Playmate and he was on a few episodes of some show. She got a pic with him: 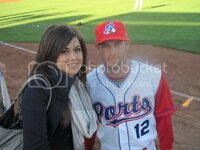 That would be Mike Coolbaugh---his brother 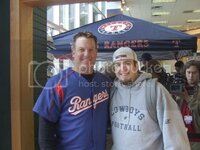 Ohhhhhhhh yes, that is one awesome haul! I had exactly one success with Mr. Leonard when he was in Houston. ONE. Nice guy but a very tough sig. he was also a tough interview after his rookie season. In 1980 he stopped talking to the press. His hitting coach, Deacon Jones, also had an afternoon sports bit on a radio station in Houston, and he decided he would interview Jeff. When he stuck a microphone in front of Leonard, the outfielder replied, "I don't talk to the press."

"But I'm your coach," Jones protested.

"Not when that tapes rolling," said Leonard.

rangersfan1982 said:
Awesome stuff. I am hoping I can pull off hauls like that once I start going to games. I have 19 cards for Scott Coolbaugh when OKC plays in New Orleans. I'll prob try to span it out over a couple of days or something.
Click to expand...

Nice, from the times I've got him I could see him doing them all at one time.

greatdadx2 said:
That would be Mike Coolbaugh---his brother
Click to expand...

yeah i looked it up sorry about that

7
Awesome haul!
You must log in or register to reply here.