One long wait and an IP I wish I didn't have 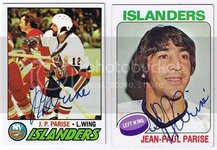 Now I will explain why I wish I did not have this IP.....
My son, 9, was recently hospitalized when his appendix ruptured. He is fine now and nearly back to 100%. He spent 11 days at the Hasbro Children's Hospital in Providence where they did an awesome job with him.
One afternoon Peter Cullen, who does the voice of Optimus Prime in just about everything Transformers you can think of (as well as some other voices like Eeyore), came to John's ward and stopped by his room. Like I said, he's 9, so Transformers are a big deal to him.
Mr. Cullen was kind enough to sign this postcard for us (it says: "To John, Roll Out. Peter Cullen").
I only say that I wish we didn't have it because of where we got it, but I am greatful to Mr. Cullen for taking the time to come to Hasbro and for whatever led him to John's room.
It's kind of hard to see (bad silver Sharpie) but it's still really cool. 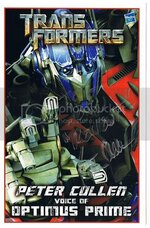 85
5.00 star(s)
congrats on the return and Hope your son is doing well

7
Great on the long wait and get well soon to the son! Hope he feels better.

551
5.00 star(s)
BANNED
Nice pickups, and glad your son is feeling better! You never know when autos will pop up!

and nice Parisé cards... he's from my Mom's home town, Smooth Rock Falls, Ontario... he was a big part of the Canadian team in the '72 Summit Series... his son, Zach, now wears the USA logo across his chest at international tournaments. That's what you get when our Canadian stars play in the NHL across the border, and their families grow up there.

Could we one day see the name "Gretzky" or "Lemieux" on the back of a USA jersey? Sacrilege!! LOL.... kidding guys.

313
5.00 star(s)
Congrats!!!!
I'm glad your son is doing well and I know he must be very happy with the Transformer Auto Postcard
Dios los Bendiga!!!!

551
5.00 star(s)
BANNED
I say everyone on the bench send him a bag of candy! Paul would love that.
You must log in or register to reply here.

3/19 returns: classic, historic and I think I have his pants!

I love my mailbox and IP's