Question about Heroes Blacks and Charcoals

357
5.00 star(s)
I decided to try and sell some cards on Checkout My Cards. My cards were loaded yesterday, but I had a question about two of the cards I sent in. They are what I have always called UD Heroes Black /399 and look like: 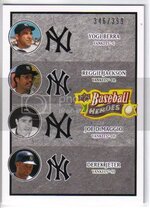 Any idea what is going one and which is correct?

12,861
5.00 star(s)
Beckett recently changed their mind and switched the Blacks and the Charcoals. I still think it should be Gray serial #399 and Black or Charcoal as the unnumbered cards. As long as the cards your selling are listed as the serial to #399....it should be okay! Best regards, David

759
5.00 star(s)
Now if they will only add the charcoal, unnumbered retail jersey card as well as the variant base color. I'd also like to see them remove the red jersey since they seem to be nowhere to be found.....
You must log in or register to reply here.