What happens to your damaged cards?

1,027
5.00 star(s)
A recent post got me wondering if anyone else did anything with their damaged cards besides throwing them in the trash?
I thought I'd share with you where my damaged cards go...
I bust a lot more retail packs than hobby and know my risks in doing so. Rather than throw away the numerous cards that come out of the pack bent, with printing flaws, nicked corners, thumbnail scratches from pack searchers, New England Patriots cards D), etc; I donate them to my four year old daughter.
Her little shoe box has filled up quite fast in the last few years I have gotten back into collecting. Now, not all of these are pulled from packs but the overwhelming majority are (some are from trades, others cards from my very small collection as a kid that I had no use for now). She really enjoys getting new ones to add to her box. Sometimes they end up in her purse which she likes to carry around everywhere now. She always likes to go through the box and pick ones out that appeal to her eye and will ask "Who is this guy?" I'll usually answer with a lot more information than I think sometimes her four year old brain can process, such as what team he plays for, a stat or two, or something that I associate that player with.
Anyways, it's really a cool thing that she likes to do and a way of spending quality time with her. She really values them as if they are in mint condition and gets really excited when I give her a "shiny card" (refactor) to add to her stash.
I would estimate the "book value" of this lot to be in the hundreds if in nrmint-mint condition. Originally I was saving them to maybe take a picture to send to the card manufacturers, but the pile just kept growing and still is. I'm not worried much about it now though. I see how much enjoyment she gets out of them. That is worth more than any monetary value.

I just skimmed through and pulled out a few of the better cards.

540
5.00 star(s)
Cory-
I sell at flea markets and garage sales and any cards that are damaged I sell seperately, nobody seems to care. Of course, I usually sell them less than if they were NM-MT but I don't mind. If they are in good shape I trade them.

96
5.00 star(s)
Those pictures of your daughter could have been taken in my 6 year old daughter's room (right down to the colorful little bracelets on her wrist). I've done the same thing with my damaged cards and alot of late 80's through early 90's cards. She is extremely impressed with the 89 Donruss cards with the purple border and anything with a trophy on it.
I will warn you to be careful. As Jane got older, she has insisted that I collect her a Topps set along with mine every year. I think that started when she was four.

7
yep my kids get them

677
5.00 star(s)
Staff member
Sometimes it is good to see cards being used how they were originally intended (post tobacco that is). My son will have a similar box (he currently has two cards - a Cosigners Alex Gordon and a Heritage Brian Finneran...he tried eating alex's head off today so they were taken away for awhile.

34
4.80 star(s)
i keep em my ocd would never let me throw them out, unfortunatley i have to learn when a card is in two its worthless (someday ill understand)... i see your daughter wears silly bands, all the kids at my school wear em.

178
4.80 star(s)
BANNED
I keep my damoged cards and base cards in boxes just for my son in the future you never know one day it comes out that for example kevin gross only had one card made of him in fleer and it is werth millions if you have it I mean i know there atre many of him but example just in case

57
4.90 star(s)
Depends how damaged they are. If the card has somehow gotten completely creased/bent in half or worse then I'll just toss it if its a common that really doesn't mean anything. If it just gets dinged, foil peeling, off center, etc I'll keep it. May try to trade it (obviously, noting to potential traders that it is flawed), but I don't have a major problem with slight damage.

Don't have any kids, I'm only 19. But I do think about things like sharing my collection with my kids when the time comes. My dad has shared the cards the he and his brothers collected. I love looking through those cards from the 60s and 70s. I guess its something about seeing names like "Ryan", "Maris", "Mays", etc that really make it fun for me.
Last edited: Jul 20, 2010

128
5.00 star(s)
Anything that is dinged to the point of being unsellable/untradeable either hits the circular file or becomes my bookmark of the week.

57
4.90 star(s)
Oh, forgot to add. Of course if the card is a GU or auto or something of that nature I will attempt to get it replaced.

473
5.00 star(s)
I unfortunately dont have any kids and envy you. If I pulled the card or traded for it and its a decently priced one, I keep it. If its in my players I keep it. If I pull it from a pack and its bad OC or dinged I usually bend it in half and trash it to try and make sure I dont pass it on to someone else. I use to try and give them to my nephew or cousin but they have gotten older and arent into it.

621
5.00 star(s)
I have kept the vintage cards as well as better cards, but the rest get junked. I have a very nice collection of worn/loved vintage Dodgers that I can't seem to allow myself to part with, even though I probably have most if not all of them in better shape.

There are people who collect these for a number of reasons though andf would probably love to get many of our damaged cards (fillers, love the "history" behind them, etc.). Here is one I obtained as a kid, despite the obvious flaw! I still have it. I think it was $5 back in the early 80s and my friend bought it. I ended up trading for it. Who knows what I gave up, but it doesn't matter now.

Here are a few scans of other groups of loved cards as well..

I just can't get rid of good stuff!!

473
5.00 star(s)
I would say if I had some of those cards in bad shape I would be more inclined in hanging onto them also. Nice stuff in any condition. Someone should be charged with abuse on that Robinson card..heh. 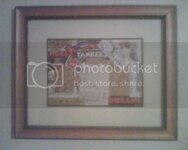 I took that with my old ****** phone when my real camera was broken. I should really hook up a better picture, it's a cool piece. It has chopped up cards and stuff from bubble mailers interestingly....

1,112
5.00 star(s)
Depending on who the player is, I either send them back to the manufacturer for a replacement card or give them to my kids.
You must log in or register to reply here.

Question: what qualifies as damaged enough for Topps to replace a card?

I found a bunch of retail…what to do…

Traded my Ohtani RCs today at the LCS now what?