348
4.90 star(s)
Was a great game, few HR's and 3 run HR stealing snag over the right field wall and a few auto's. Diane I haven't forgotten about you Jacob just really seems to not wanna sign your ball or something.

It was also Jack Morris bobblehead night with Jack signing. Got him on a ball, saw a few times including a guy I graph with now and then get J Morris. Well I did get his full sig kinda, his pen died for the beginning of his sig kinda. When you look close at it you can definately tell where the whole J is. Picture sucks but I think you can see enough to tell. If anyone is intrested in it let me know, I'm willing to try taking a better pic and trade/sell it. Had to get my POS digital camera that doesn't focus properly anymore out and don't know how much better of a pic I can get. I already have him on a Trump ball thats holding up fine I just figured I'd upgrade it to a ROMLB but the other sig is nicer needless to say. 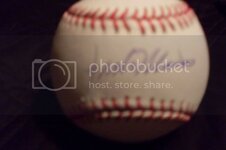 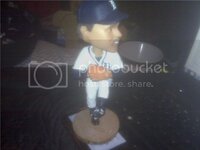 Saw the team set was out so had to pick up a set to snag a few guys while waiting on Turner. 1st 2 are Jordan Lennerton, next 2 are 09 3rd Round pick Wade Gaynor. Bottom row is Michael Rockett, Victor Larez, Billy Alvino and Jacob Turner again. 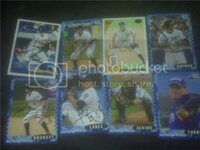 Paws made a suprise appearance and even posed for my buddy to take a picture. 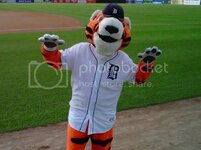 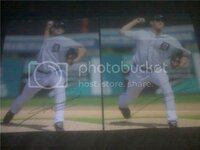 All in all not to bad of a night even though I'd have liked to Morris to have came out crisp and to have gotten Diane's Turner ball finally done. Unfortunately the only game here for a few weeks that will be home I could go to atleast the first part is Sunday's game, and guess who will be starting thus not signing? Turner
Last edited: Jun 5, 2010

348
4.90 star(s)
oh yes and for the record, I asked Morris about Armando, long convo short, he says he should have it in the books

I'm waiting patiently.....Wish I had been there for Jack Morris, love that bobblehead too....Thx for the update....Just keep me informed...

348
4.90 star(s)
I swear everytime he sees me or my buddy with me having a ball he just won't sign or will ignore the ball and sign for everyone else but who has the ball. I really don't have anything else for him period now so I'd imagine I'll be able to get it done the next game I get to waiting after the game for sure.

Awesome pick ups! Congrats! Same kind of thing happened to me when I got Evander Holyfield to sign a photo that was already signed by Buster Douglas. The pen started out a bit slow on the first character of his sig. Still is an awesome pick up, as is that ball. Congrats!

houbb said:
Awesome pick ups! Congrats! Same kind of thing happened to me when I got Evander Holyfield to sign a photo that was already signed by Buster Douglas. The pen started out a bit slow on the first character of his sig. Still is an awesome pick up, as is that ball. Congrats!
Click to expand...

Intrested in it? Offering it here first before I go throw it on SCN to try trading or selling. Both times now I've gotten him for free something goes wrong. First time he side paneled my ball and his sig on my mini helmet was barely visable. Needless to say the 3 auto's I got at a paid signing there was no issue with those one's at all. Its almost like a curse with me and freebies, something always goes wrong lol.