I just officially gave up on my Masterpieces redemptions!

231
5.00 star(s)
I hated to do it, but with all of the talk about UD losing the baseball license and that redemptions are now in question, I figured that these will never get signed and I should at least get something in return. So, I finally asked for replacement autos for my Griffey & Victor Martinez 08 Masterpieces Stroke of Genius autos. The only two that I needed for my 08 Stroke of Genius set.

I'd been waiting for the Griffey for 1 1/2 years and the Martinez for almost a year. My set is complete without them because they weren't produced, but it would have been great to have them. Here's what they would have looked like: 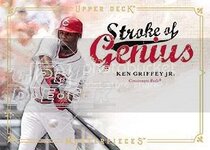 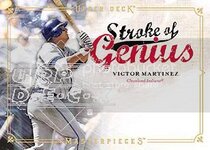 When I asked what I would get in return he told me that he would put Griffey, Ripken, Ryan and possibly Jeter down for the Griffey. He said I probably wouldn't get a Jeter but I'd rather get a Jeter so I can get something nice for what I paid for the Griffey ($150). UD has flooded the market with Griffey stuff, so I'm hoping for a Nolan Ryan. He said I'd probably get a Youkilis for the Martinez.

Again, I hated to do it, but it's been a year and a half on the Griffey & almost a year for the Martinez, so I don't think they would have ever gotten signed.

Would you have done the same thing?

NYMets6986 said:
Thats too bad, i hope you get some really nice replacements!
Click to expand...

208
5.00 star(s)
I would have done it also. The forecast for UD is looking pretty horrible. Good luck on the replacements!

12,668
5.00 star(s)
I hope you get what you wanted....But if they flooded the market with Griffey jr auto's....why can't use one of the band aid auto's and stick on your redemption card? Best regards, David
You must log in or register to reply here.