My all time favorite NY Giant...

along with Phil McConkey...They appeared at Freehold Mall @ Pro Image this past Saturday. Bavaro auto ticket was $59.00 and you got McConkey for free

I had met Bavaro once before at NY Jet training camp when he was helping Bill Parcells in his first year as head coach.When Bavaro retired I had painted a banner in hopes of getting the Giants to retire his number, he joked with me asking if I wanted him to retire.Fast forward to this past Saturday, I showed him the banner and he told me he remembered the banner and then thanked me for my efforts in trying to get his number retired. He also said he was proud of Kevin Boss wearing his number.

Here are the 2 cards I got signed in hopes of completing my 87 Topps Giants set... 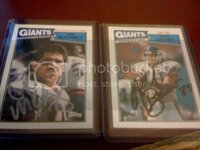 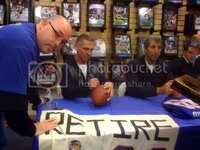 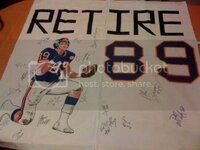 127
5.00 star(s)
that's sweet. i hear mcconkey is in amazing shape trying out for some kind of track competition...congrats

Oh, that is waaaaaaaaay cool! I love the stadium shown banner. That's awesome!
You must log in or register to reply here.

Your Favorite Cards of All Time?
2