32
4.90 star(s)
Had a really good weekend. Saturday went horrible and got nothing, but went back for the Jets on Sunday and even though I didn't get any current players, I'd say I made out well. 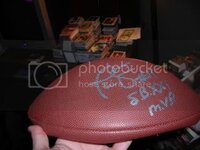 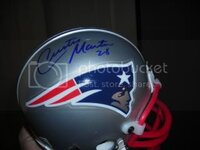 Then another former Super Bowl MVP came out and said he promised he would sign next time in town because he wanted to get leaving for the game. He went to his limo and found out he was early and came over and was one of the coolest guys ever. Talked to everyone and took pics with anyone that wanted one. I was able to get this football signed and a pic with him. 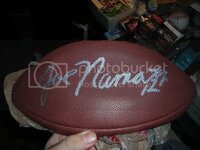 1,979
5.00 star(s)
Congrats
Beautiful weekend for you.
Nice pick ups
Job well done
Where is the Pic of you and Wille Joe
Lets see it
Chief

551
5.00 star(s)
BANNED
I'm a big fan of Julius..he is a great guy. When he first got drafted by Dallas out of ND, him and his family came into the Cowboys Pro Shop I was working at and I got to help pick out all their Dallas gear, pretty sweet

chieftazmisty said:
Congrats
Beautiful weekend for you.
Nice pick ups
Job well done
Where is the Pic of you and Wille Joe
Lets see it
Chief
Click to expand...

I will get the pic up once I get it from my friend. Didnt have my camera so waiting on him to send it to my e-mail.

ckinney said:
Nice pick ups. Every time I see Joe Namath I think of this http://www.spike.com/video/joe-namath-i-want-to/2483773

28
5.00 star(s)
Great additions to your collection, congrats.
You must log in or register to reply here.